P.P. Infinity Group Sp. z o.o. is one of the biggest textile companies in Europe.

P.P. Infinity Group Sp. z o.o. was founded in 1993 in Bartoszyce. It's a leading European producer of textile premium clothing.

Production company Infinity Group. o.o., founded in 1993 in Bartoszyce is the European market leading company producing clothing in the premium segment. The main area of activity of the company is production and service ennobling stitching garments both knitted and woven fabrics. The production plant is equipped with highly technologically advanced machinery and equipment and sewing machine embroidery. Efficiency of more than 200 people crew and its many years of experience is the main source of competitive advantage.

It is worth to mention that one of our tightest partners, Dale of Norway, is an official supplier for International Olympic Committee. The whole collection for 2010 Winter Olympic Games in Vancouver was designed by Bartoszyce’s Infinity Group.

For many years, Infinity Group co-works with Camilla Thulin, famous stylist and fashion designer from Stockholm, who is particularly known for designing the outfit for Army of Lovers and for a Swedish singer Malena Ernman, which was used by the performer at Eurovision Song contest 2009.

Infinity Group is the only company in history from utside Scandinavia, which was involved in organisation of 2011 Nobel Prize gala. The chairman Mr Wojciech Krakowinski has been announced the artistic manager, and a part of suits for the gala designed by Camilla Thulin were manufactured by Infinity Group.

Apart from all of those clothing items, Infinity Group also produces corporate clothes and uniforms. Those products are made of best-quality yarns covered with anti-pilling appreter. Corporate clothes are made for both companies as well as for national and international institutions. Our biggest clients are for instance: International Police of Kosovo, Securitas, delivery companies (including DPD), automotive concerns (Mercedes, Volvo, Volkswagen Group etc.), and also Orlen, Statoil, Jet, Amsterdam Schiphol Airport and many others.

What is more, the company manufactures a unique, trilaminar, antibacterial, and non-flammable thermoactive underwear Termo Riginal, which has been used by armies and services of NATO and Scandinavia for many years.

Well-qualified and experienced staff as well as permanent long-living co-operation with brands known in Scandinavia and Western Europe result in the continuity of high-standard production and perpetual technological development of the business.

Infinity Group is an enterprise of great potential and vast experience in clothing production as well as in the guidance over various business projects. We own a real estate complex (over 14,000 m2 of under-the-roof space). We belong to a wide range of significant associations as well as to employers’ and employees’ organisations, both international and domestic, such as Polish Exporters Association, The Business Club of Warmia and Masuria, and The Polish Association of Private Employers for Fabric and Clothing Production.

The production company of Infinity Group Sp. z o.o. has been amongst top Polish export businesses for years. Over 80% of Infinity Group’s activity is export. In November 2012 the Association of Polish Exporters awarded us again with the title of Leading Exporter of the Year.

Not only is the company involved in different associations and organisations, but it is also actively engaged in numerous initiatives and economic missions aimed at sourcing new trade areas as well as at decent representation of Polish business within different markets.

Since the beginning of its business activity, Infinity Group has been stuck to the idea of running the business responsibly, consequently building good terms with all in our environment. Respectively to this resolution, the company seeks sustainability with honour to economic, ecological and ethical rules. As one of the first companies in the region – with co-operation with WaMaBoss Forum – Infinity Group introduces the CSR concept aimed at the improvement of hire standards and development of company’s transparency.

Due to the need for precise cutting and the growing volume of production, constant development the investments in new technologies is indispensable. From April 2017 we use a specialist cutter which at a rapid pace, with the highest precision and with the optimal use of materials allows us to fulfill orders of the most demanding customers. 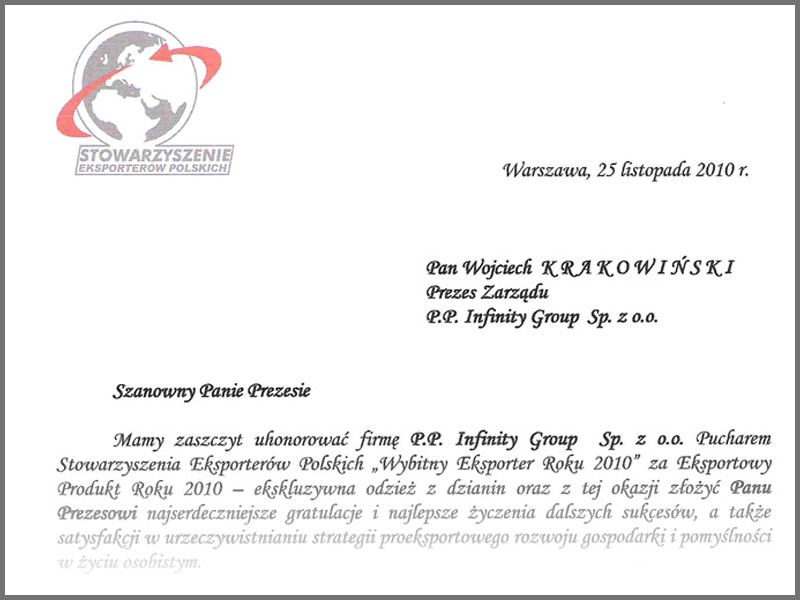 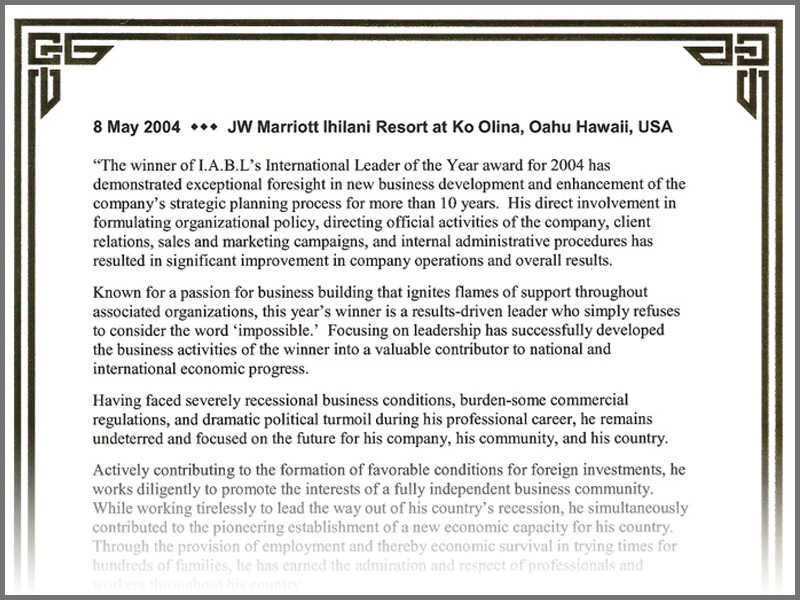 2004 International Leader of the Year 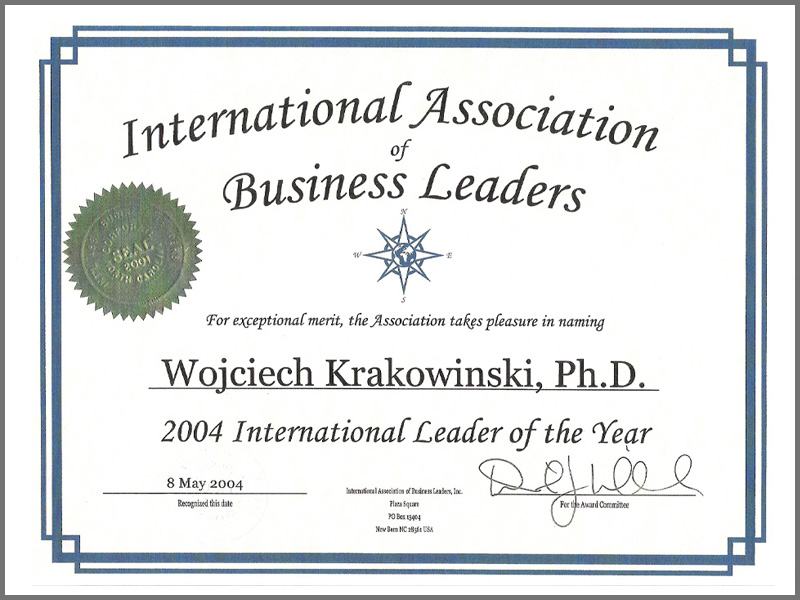